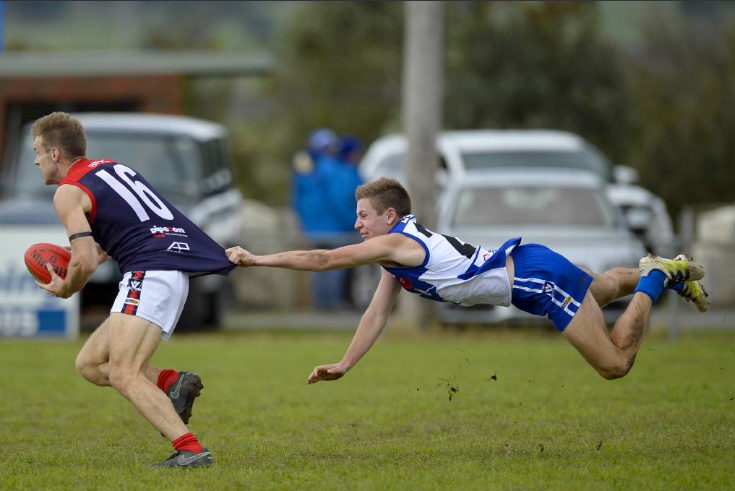 This article is curtesy of The Courier’s John McGregor

WAUBRA rolled Bungaree by 17 points in a cracking contest on Saturday to maintain an unbeaten start to the Central Highlands Football League season.

The Demons took a gritty one-point lead at the first change after banging through the first two goals of the day.

Bungaree’s Mitch Bowman and Luke Mirtschin looked like they were going to kick a bag, but goals were hard to come by in the second term.

It was a tight and congested battleground that quarter with gutsy goals from Waubra’s Lincoln Barnes, James Lukich and Jackson Kinna putting the Roos ahead by a goal at the half-way mark.

Kinna looked dangerous all day and his elevation to the seniors came after a nine-goal haul in the reserves against Daylesford the week before.

A six-goal burst in the third term pushed the Waubra margin out to a game-high 22 points.

Barnes goaled again and so did Kinna. But a highlight was the running major from Matt Dawson, who bolted out of a pack, slotting it home to the roar of fans.

Austin Murphy, who was a late inclusion for the Roos, snuffed out a challenge from the Demons with two quick goals before the last change.

The torrid, bone-crunching pace took its toll on players and one who didn’t weather the storm was big Bungaree backman Shaun Finlayson. Finlayson was stretchered from the ground in the third term with a serious knee injury.

The final quarter looked like it was heading for a shootout with Waubra’s Murphy and Kinna kicking majors.

But Bowman rose to the occasion, booting two rapid-fire goals for the Demons. His skipper Jackson Murphy also scored in the dying minutes.

Bungaree cut the margin by five points in the final term, but didn’t have enough gas in the tank to go any further.

Waubra coach Grant Luscombe felt his players were on the edge of breaking the game open.

“To their credit, they stopped it. They got a goal here or there. It was frustrating as a coaching group,” Luscombe said.

Bungaree coach Heath Pyke, who led from the sidelines on Saturday, didn’t think his players were clean enough when in possession.

Posted in Uncategorized
← Round 4 ResultsBungaree Cup 2017 →
×
Scroll To Top